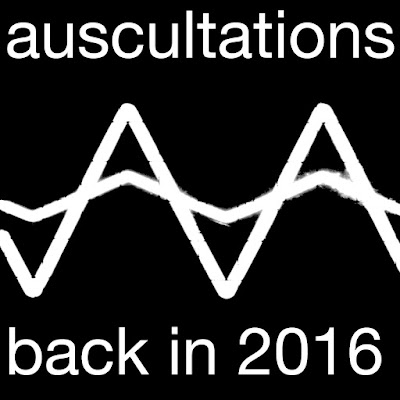 In 2015, Auscultations took a back burner to my own musical projects. In 2016, it will awaken with more reviews, rants, and some new projects. Please stay tuned!

Posted by Unknown at 8:57 AM No comments:

On Sunday, June 7, I got to see Long Beach Opera's production of Hydrogen Jukebox. One of the most interesting parts of LBO productions is their exploration of new performance spaces. Hydrogen Jukebox is their second production at the Port of Los Angeles in San Pedro, the first being Ernest Bloch's Macbeth. While Macbeth took place in the World Cruise Center, Hydrogen Jukebox was produced in a giant warehouse that is part of Crafted. As the production got underway, the golden light of the sunset over the sea seeped gently through and between the cloths covering the giant doors and windows, creating a sort of industrial pastoral vibe.

Interacting with new spaces creates a world of unforeseen challenges and discoveries, and there seemed to be quite a few of both for director David Schweizer. The layout of the audience reduced the perceived stage area so that the size of the vast warehouse didn't overpower the performers. Scenic designer Caleb Wertenbaker's set pieces consisted of mostly-unadorned warehouse paraphernalia, like ladders and platforms, wheeling on and off stage on casters. This created a moving/spinning parade of objects that seemed to thoroughly explore the vertical space of the stage. Dan Weingarten's lighting design seemed busy at first, but when you consider how much space needed to be transformed with such minimalist stage design, it did a great job of making each song exist in it's own head space.

I am big fan of both Allen Ginsberg and Philip Glass, so there were high hopes for their collaboration. I was already familiar with many of Ginsberg's poems that became part of Hydrogen Jukebox. Partially inspired by Howl, I even incorporated the character of Moloch into my own Collapse.

Though I almost always enjoy Glass' instrumental music, his vocal music after the initial operatic trilogy is still a quagmire to me. The sporadic beauty of his operatic output in the last 30 or so years belies its stagnant consistency. In Hydrogen Jukebox, the most stunning moments feature either vocalise or spoken text. The most frustrating parts attempt to reduce the organic flow of Ginsberg's poetics into neat couplets. The resulting flourishes of multi-syllabic anti-melisma stuffed into unwavering periodicity reduces the florid libretto to a phonemic and rhythmic obstacle course for the singers to run.

But, there were some really powerful musical moments as well, like Michael Shamus Wiles' recital of Wichita Vortex Sutra, the vocalise in Nagasaki Days, or the plaintive choral ensemble singing in Father Death Blues. I've listened to Ginsberg's original version of Father Death Blues quite a few times, and appreciated the New England church vibe that Glass' arrangement gave it. As Morton Feldman said, "OK, give them a moment of beauty - how much more do you need?"

Hydrogen Jukebox finishes LBO's 2015 season, but they'll be back in 2016 with works by Tobin Stokes, Francis Poulence, and Jacob TV. You can find more info on the Long Beach Opera website.

Posted by Unknown at 9:47 AM No comments:

Here are some albums and collections of stage banter by famous musicians.

Almost all of the fatty musical excess has been edited out, leaving only the raw and true cult of personality.

I'm sure there are plenty of others out there, so please share if you know of one!


Having Fun With Elvis On Stage


Having Fun With Fugazi On Stage

Guided by Voices' Robert Pollard's Relaxation of the Asshole

On April 19, I went to the Neighborhood Unitarian Universalist Church of Pasadena to see People Inside Electronics' presentation of Andrew McPherson's Magnetic Resonator Piano.

Like all great ideas, the MRP is the sort of thing that seems both far-fetched and so obvious that it is a surprise it doesn't already exist. It would be reductive to call the MRP merely the ultimate e-bow, though it works on a far more advanced version of the same concept. Strings can sustain endlessly through electromagnetic induction, but it can also bend pitches and alter the timbre of the sustained pitch by highlighting various partials. The resulting sounds are surprisingly similar to the CMC-ish timbres that riddle the history of electronic music, and I suspect that comes from a similar ADSR approach to sound. The retro-futurism that the MRP lends to the familiar sounds of the grand piano gives it a surreal flair. That it does so acoustically hints at exciting possibilities.

The concert featured a hockey line of fantastic pianists, including Genevieve Lee, Nic Gerpe, Steven Vanhauwaert, Richard Valitutto, and Aron Kallay. To my ears, all the pianists sounded great at the helm of the augmented piano, especially considering that they probably didn't have a lot of hands-on time with the MRP. The first half of the concert featured works written previously for the instrument by east coast composers. It was opened by McPherson's own Secrets of Antikythera, which was a nice and gentle brain palate cleanser to start the concert off. The second movement of Daniel Shapiro's Kirchengesang had a delightful sheen of processing that reminded me of a tonal, pastoral echo of Stockhausen's Mantra. Daniel Fox's Intermezzo remained astutely pianistic, and Tony Solitro's Spectra of Morning had some moments that reminded me of an Aeolian harp.

The second half of the concert featured works by local LA composers commissioned for this concert. Of these pieces, Elise Roy's Sonatine seemed to integrate the device the best. Pianist Richard Valitutto performed the piece, extending the ADSR approach to included vocal sounds and soloistic explorations of the string's partials. Julia Adophe's Magnetic Etudes was a great way to start the second half, and Jeremy Cavaterra's Gegenshein had some nice moments using the sustain of the MRP. Alexander Elliot Miller's 88MPH ended the concert with a playful fantasy on the theme to Back to the Future.

Contemporary western music has something of a love/hate relationship with the piano and all it symbolizes. The MRP is a productive contribution to that conversation, and it is probably best that device was gently introduced rather than prominently featured. Much of the music heard on Saturday only scratched the surface of the MRP's capabilities, and I found myself wondering how each piece would sound were the MRP not present. Really, most of the music would have sounded roughly the same. Each piece had a few key moments that integrated the device into the music, but the majority of it would have fit into a perfectly pleasant late 20th century piano recital (or sometimes a Vangelis concert). They weren't roaming freely in the greener pastures of a timbrally expanded piano, but rather building a solid bridge to get there.

Tonight, May 1, People Inside Electronics teams up with the Hear Now Music Festival to present electroacoustic works by local LA composers. I won't be able to make it, but it sounds like a great concert!
Posted by Unknown at 9:16 AM No comments: