Notations has been on a brief hiatus do to me being quite busy myself, but here's the twenty-sixth installment of it! Inspired by Cage's 1969 book, Notations is a collection of graphic scores, hand drawn music calligraphy, computer code, compositional sketches, text scores, and other innovative forms of musical notation.

I'm changing the schedule of Notations to a pace I can keep up with. Instead of being weekly, every OTHER Monday we'll showcase notation by two different composers, primarily focusing on those local to Los Angeles. This week's composers are Vera Ivanova and Christoffer Schunk. All images are used with permission, and copyright is retained by each piece's respective creator. Click on the images to see a larger view.

Vera Ivanova's compositions have been described as "... humanistic and deeply felt works ...". In her early Fantasy-Toccata (2003) for violin and piano, "the humor takes on a harder, sardonic edge recalling the composer's roots in the work of Shostakovich and Schnittke". In her later Three Studies in Uneven Meters for piano (2011), "the greatest power of her brief, angular, crystalline music lies in its power to provoke the gods of symmetry". After teaching as Assistant Professor of Theory and Composition at the Setnor School of Music of Syracuse University (NY), she was appointed as Assistant Professor of Music in the College of Performing Arts at Chapman University (Orange, CA). Dr. Ivanova is also teaching at the Colburn Academy.

More info at veraivanova.com
Posted by Unknown at 8:56 PM No comments: 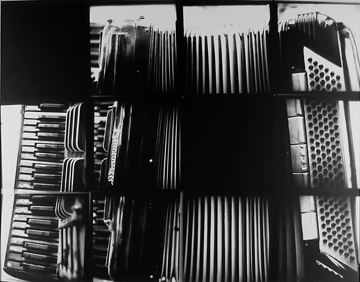 There's been some radio silence from auscultations.net for a while, because I've been so gratefully busy! But I'm getting back on the ball this summer, with some reviews I'm so behind on.

This Sunday, my experimental accordion ensemble Free Reed Conspiracy will be playing at SASSAS' Blast![11] fundraiser! We'll be doing a sextet performance, along with Roswell Sisters and Hare's Breath Ensemble, and DJ sets from DJ Lady C.

The entire event is 4-8, and we'll be playing near the end. Come have some North Coast beer, bid on some art, and listen to some music!
Posted by Unknown at 11:29 AM No comments: