On February 22, Jacaranda presented two "Mid-Century Modern" concerts on the same day at the First Presbyterian Church of Santa Monica. Adam Tendler played Cage's Sonatas & Interludes in the afternoon, and after a dinner break Christopher Taylor playing Messiaen's Vingt regards sur l'Enfent-Jesus. I went to hear the Cage, but, sadly, missed the Messiaen, which is a really fantastic piece.

For Sonatas & Interludes, and any prepared piano piece, timbre is a key part of every performance. One's approach the preparations, and how those intentions interact with that particular piano, shapes a majority of the sound world of the hour-long piece. Tendler's preparations sometimes accentuated surprising partials on the strings, and other times allowed more of the original pitches to remain than I was used to hearing. With these preparations, the specific sustains and releases of vibrating partials and jaded fundamentals became more of an integral part of the piece as well. 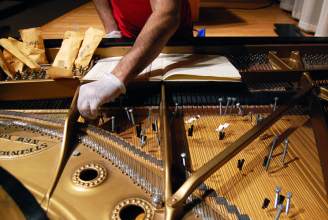 The prepared piano is a muted instrument, and the softness of its sound always surprises me when I hear it live (and it is easy to overlook this on recordings). Even so, Tendler approached the piece with a tenderness worthy of Cold Blue. While some other fantastic performances I've heard have embraced a wider dynamic range, Tendler revealed new corners of the piece by holding it up to a softer, more diffused light.