TDM on the East Coast! 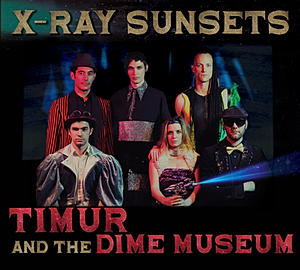 Timur and the Dime Museum will be playing several shows on the East Coast this weekend! If you're in town, come down and hear some exciting new music. We'll have copies of our new album, X-Ray Sunsets, as well! BTW, you can hear X-Ray Sunsets on Bandcamp now!

On July 25, we'll be playing at the Downstreet Art Festival, in North Adams, MA.

Following that performance, we'll be travelling to New York to play at the legendary Joe's Pub on July 27! We are especially excited to be returning to New York, after having an amazing time being part of Beth Morrison's Prototype Festival in January. Buy tickets for this show ahead of time!

I really hope we'll see you at one of these shows!