On June 7 and 8, John Schneider's Partch Ensemble presented Eroica Dances at REDCAT as part of Microfest. It was the debut concert of their newly built Marimba Eroica, a large 4-note marimba that is so low it straddles the fence of audible frequency. It is one step further in the gradual reconstruction of Partch's original instruments, and each accumulation opens up part of the composer's repertoire that the ensemble otherwise might not have performed. 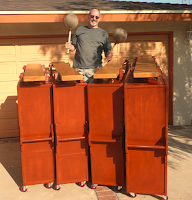 The program consisted of the three parts of Plectra and Percussion Dances, and Dance Pantomime from Oedipus. The concert began with the surreal satire of Ring Around the Moon. This cartoonish piece brought to mind a hobo/Stalling reflection on Pierrot Lunaire, propelled by the narration of bass marimbist TJ Troy.

This was followed by Even Wild Horses, subtitled "Dance Music for an Absent Drama." A treatment of Rimbaud's A Season In Hell, this piece refracted Afro-American musical styles through the lense of the Partch multiverse over the course of three acts. Surprising grooves were concocted on a colorful variety of instrumentation. Act II brought out baritone Paul Berkolds, Ulrich Krieger on sax, and Derek Stein on adapted viola. A classy touch was Erin Barnes' gong notes announcing each new section.

After an intermission, the group played Dance Pantomime, an excerpt from Oedipus. A treatment of Yeats' translation of Sophocles, this piece is significant because of it's historical role in Partch's amazing life story. While in Europe on a Carnegie research grant in 1934, Partch met Yeats and got the poet's blessing to set his text to music. He also built his first 43-tone organ. Upon returning to the US in 1935, Partch embarked on his hobo journeys documented in Bitter Music, parting ways with Oedipus until 1951. The chorus in this performance was wonderfully represented by Timur Bekbosunov and Argenta Walther. The concert ended with Castor & Pollux, which the Partch Ensemble has performed on numerous occasions. It is a stellar showcase of many of the instruments in the ensemble, giving the listener a chance to hear them in various pairings as well as in the context of the full group. It was the only memorized piece on the concert, and the tightness and energy of the playing gave it a feeling of being a welcome reprieve for the ensemble from the relative unfamiliarity of the rest of the program.

As is customary after the Partch Ensemble's annual summer REDCAT performances, the stage became a musical petting zoo post-performance. Much of the audience flooded onstage, as the performers watched over the instruments (and mic's) and fielded questions. Most were justifiably interested in the very large Marimba Eroica.

Being a 4-note instrument on the border of audibility, it is hard to "feature" the Marimba Eroica, per say. However, it definitely made it's presence known, both visually and aurally as does a timely bass drum and/or crash cymbal accent. While thrilled by the instrument, Partch lamented the necessary inefficiency of his original instrument design. In his Genesis of a Music, he states:


"A pipe for the lowest tone... would need to be some 12 feet high... and the player would have to stand on a riser nine feet high and use a ladder to get there....

I have often dreamed of a private home with a stairway which is in reality a Marimba Eroica, with the longest block at the bottom and the shortest at the top, and with the type of resonator described above. The owner could stipulate his favorite scale, then could bounce up to bed at night hearing it and paddle down in the morning for breakfast hearing it. He would need to be athletic, since simple walking would dampen resonance. If he were very athletic, he could take two or three steps at a time and produce an arpeggio."