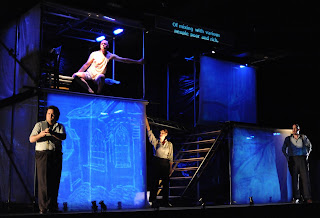 On May 18, I went to the Bixby Knolls Expo Center to experience Long Beach Opera's double-header of Michael Gordon's Van Gogh and Stewart Copeland's The Tell-Tale Heart. It was an interesting programmatic bifurcation of LBO's previous presentation of Philip Glass' Fall of the House of Usher, with each piece sharing different traits with Glass' opera.

The What's Next? Ensemble collaborated with LBO, acting as the house band for both pieces.  They did a great job sounding tight among the diverse ecology of ostinati that both composers set up. Last April I wrote about What's Next? Ensemble's performance of Van Gogh at the now defunct Royal/T. All of my previous commentaries on that composition are still true, though the piece gained much from staging. A two-tiered stage was divided into 4 "rooms," with retractable scrims that became video projection screens. Though the projections often felt arbitrary, the final image of Van Gogh disappearing into a projected grassy field was a wonderfully poetic way to end the piece.

In the upper left-hand room, actor Mark Bringelson portrayed in near-silence the artist struggling with his inner turmoil as one only does alone in their room. It was an interesting directorial choice by director/production designer Andreas Mitisek, one that gave the impression that all events outside of that room were merely embodiments of what was happening within that quintessential struggling artist inside. 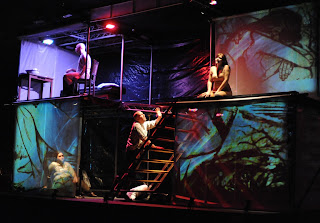 My favorite musical moment was soprano Ashley Knight's aria in Part 3. It is a surpisingly haunting melody, one in which a listener can't help but infer a Tom Johnson-esque combinatorial process. Unlike Johnson, Gordon obfuscates his method, creating an Apollonian distance that harkens back again to Glass. Knight treats the melody with due delicacy, and when baritone Jason Switzer enters, his transparently contrapuntal countermelody re-introduces an element of the Dionysian. This portrayal of the classical dichotomy was augmented by the sexual tension introduced in the staging. I found myself amazed at the singers' ability to sing so well lying down.

After a brief intermission, it was time for The Tell-Tale Heart. When I told people afterwards that I had just seen an opera by Stewart Copeland, most thought they had heard wrong. Yes, it is in fact the Stewart Copeland that most people know as the drummer for The Police. His Tell-Tale Heart was derived from Poe's famous story, just as Glass' Fall of the House of Usher was. 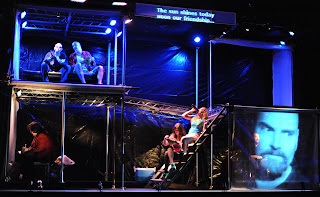 It seems difficult to approach the 19th century macabre of Edgar Allen Poe without a sense of absurdity. Perhaps we can blame the iconic William Castle/Vincent Price films and the Tim Burton faux-gothic aesthetic that they inspired. Glass' score all but ignored this tendency towards camp interpretation, though in LBO's Usher it was slyly re-introduced by director Ken Cazan. Stewart Copeland embraces it with open arms, and Mitisek set the tale in modern day Los Angeles (the valley, I would venture...). The old man with the evil eye was portrayed by Mark Bringelson, again almost silently, as a reclusive dealer. His placement in the upper left room drew attention to itself as a clear aesthetic commonality between the Copeland and Gordon.

Baritone Robin Buck played the main character of the murderous Edgar, propelling the narrative with a Monster Mash sprechstimme that betrayed Copeland's roots in the world of pop music. Copeland's score toed the fine line between opera and musical theater, while his instrumental writing reflected his experience in film music, remaining as transparent as most film music aspires to be. After hearing Van Gogh, Copeland's vocal writing seemed much less classically refined and much more rock-influenced, with more unison and parallel lines than contrapuntal conceits. As one might expect from this famous drumset player, the percussion writing was the highlight of the instrumental score, with Bartok-inspired timpani glissandi and churning rhythms throughout. Though it might have been imagined, I thought I heard a brief reference to Murder By Numbers as the main character carried the old man's dead body to it's hiding place beneath the floorboards.

Long Beach Opera's next production will be Ernest Bloch's Macbeth, which the LBO website says is already sold out! Hopefully you are one of the lucky few that got a ticket ahead of time...
Posted by Unknown at 7:06 PM