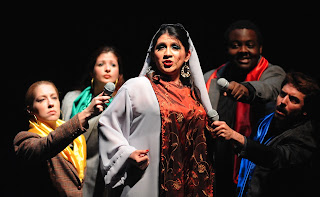 On March 30, I was able to see/hear the Long Beach Opera production of Gabriel Ortiz's Camelia La Tejana: Only The Truth at Long Beach's Terrace Theater. Originally titled ¡Unicamenta la Verdad!, the opera is centered around Camelia La Tejana, a narcocorrido character initially made famous by Los Tigres Del Norte in the song Contrabando y Traicion.

The colorful orchestration and prominent rhythmic drive of Ortiz's music brought Silvestre Revueltas to mind, but there were also similarities to Anne LeBaron's Crescent City, which The Industry premiered last spring at Atwater Crossing. Both productions presented an unconventional staging, a prominence of video, folk and pop music elements incorporated into the score, occasional electroacoustic moments, a hyphenated opera genre (Videopera vs. Hyper-opera), and an apocryphal female lead character.

The libretto for Camelia La Tejana was collaged together by the composer's brother, artist Rubén Ortiz Torres, from various media about the main character. With a semi-mythological tabloid character such as Camelia La Tejana, this seems especially appropriate. A collaged libretto is a more accurate portrayal of the media-parsed contemporary consciousness than a singular vision of one writer. 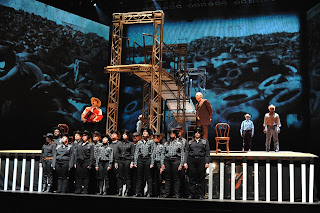 The centerpiece of the set design was a square raked stage with a square hole in the middle, raised about 5-6 feet above the stage. The orchestra sat below the raised stage, while a bridge running parallel to the audience's sightline spanned the hole. The bridge would occasionally lift throughout the production. It provided an interesting representation of the Rio Grande/Bravo border, above which the immersive video design could dictate the mood of each scene. Though a clearly innovative confrontation of the problem of scale on such a large stage, this design seemed to provide a conceptual challenge for the director. The performers rarely appeared fully comfortable interacting with the stage, while the bridge raised and lower seemingly at random. On the other hand, the sight of that same set piece was so immediately striking that everyone commented on it as they entered the space.

The most ecstatic moment for me was at the finale, when Enivia Mendoza sang Contrabando y Traicion, the song which originated the myth of Camelia La Tejana. Ortiz stripped the song of norteño music's characteristic oompah's, transforming it into a powerfully lush and spacious aria. This moment also finally made good on the dramatic promise of the bridge. Mendoza began the song atop the bridge, which was raised to its highest point. Over the course of the song, the bridge slowly lowered, touching down just as the song ended. It was a simple yet powerful moment. There were also notable performances by Nova Safo, John Matthew Myers, Adam Meza, John Atkins, Maria Cristina Navarro, Susan Kotses, and David A. Blair. Throughout the piece, I imagined I heard some extra low brass, and talking to some of the musicians after the performance confirmed my suspicion. The lowest of brass was provided by tubist Luke Storm, who was uncredited in the program. 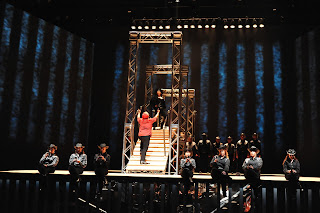 Being born and raised in Alaska, my knowledge of the rich musical heritage of Mexico feels a bit stunted. I imagine that having grown up with the original Los Tigres Del Norte recording would have added much contextual depth to the piece, as it must have at the 2010 professional premiere in Mexico City. As such, I would love to take another listen through Ortiz's vivid score. Has anyone considered making a recording?

Long Beach Opera's next production is in May - a double-feature of Stewart Copeland's Tell-Tale Heart and Michael Gordon's Van Gogh.
Posted by Unknown at 12:19 AM