Concert Review: LBO's Fall of the House of Usher

Philip Glass' music of the last 30 years is a quagmire. Though the influence of his aesthetic on contemporary music is undeniable, his staggeringly prolific output is "uneven" (as eloquently put by Kyle Gann). If you have heard his solo piano music, string quartets, and/or any one of his 22 operas and chamber operas after Akhnaten, then you will not be surprised by anything you'll hear in his musical interpretation of Edgar Allan Poe's The Fall of the House of Usher. That predictability, which has the potential to sound formulaic, is used to mesmerizing effect by director Ken Cazan in Long Beach Opera's West Coast premiere of Glass' 1988 chamber opera.

Cazan is in no way subtle in accentuating the homosexual tension present in Arthur Yorinks' libretto. From the moment that William (the anonymous narrator of Poe's story) dashes off to prepare for his trip to visit the hypochondriac Roderick Usher, the deep melodrama of Glass' music is laid out for camp deconstruction. This is the Poe of Vincent Price, minus the Les Baxter soundtrack (did Baxter ever write an opera, BTW?). As with Price, the laser-pointed seriousness of the performers is what gives the piece its ability to sustain this particular brand of darkness for 90 minutes. Through the resonant filter of this bold interpretation, the stock minor key affects of Philip Glass take on a fascinating new form - one of a knowing wink that is much easier to admire than that of composer-as-businessman.  This is not to diminish the staunch sincerity of the performance, however. To the contrary, such a complex contextual display presents the audience with a deeper emotional content that is surprisingly difficult to compartmentalize.

Cazan's design team deserves extra applause for bringing such a production to life. Alan E. Muraoka's modular walls and doorways rolled across the stage, always seeming on the verge of collision. The rarity of parallel surfaces and the stark grey panels occasionally reminded me of Disney Hall. Lighting designer David Jacques' work brough Olafur Eliasson's light installations to mind, while providing a symbiotic cohesiveness to Muraoka's sets that one could attribute to a long history of collaboration. Jacqueline Saint Anne's costumes contrasted the minimalist-inspired design, adding a human element that mirrored Glass' treatment of the voice.

Under artistic director Andreas Mitisek's baton, the instrumental ensemble did a fantastic job arpeggiating their way through the piece, creating a solid bed for the singers to lay in. And lay they did. Soprano Suzan Hanson did a fantastic job reprising her role as the vocalise-prone Madeline, while baritone Lee Gregory and tenor Ryan MacPherson solidly expressed their dramatic exchanges. Their actions were tacitly facilitated by an eight person crew of mohawked Rufio's that guided Muraoka's sets on their wild rides back and forth across the stage.

When I first read Poe's original story as a teenager, the potential homoerotic undercurrent of the story had never even occurred to me. Then again, I had written off the tale as less viscerally sinister than his other writings, like The Casque of Amontillado or The Masque of the Red Death. The details of this LBO production bring a whole new weirdness to the story, which I otherwise would have missed, and I always appreciate a little weirdness.
Posted by Unknown at 1:22 PM No comments: 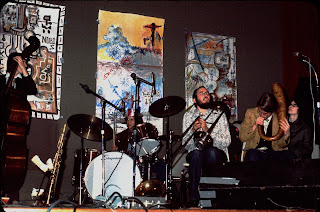 A friend and mentor, Anne LeBaron, will be performing on Saturday at this Raudelunas 'Pataphysical Revue reunion concert in Tuscaloosa, AL.

The Raudelunas 'Pataphysical Redux brings together many of the original members of this groundbreaking Alabama art collective, including internationally acclaimed composer/harpist Anne LeBaron, avant-­blues guitar master Davey Williams, world renowned violinist/violist LaDonna Smith, big band leader & wood sculptor Craig Nutt, and many special guests, as they return to the site of one of their most infamous recordings, the Raudelunas 'Pataphysical Revue, recorded at the Ferguson Theater in 1975 and listed in The Wire magazine's "100 Records That Set The World On Fire While No One Was Listening." 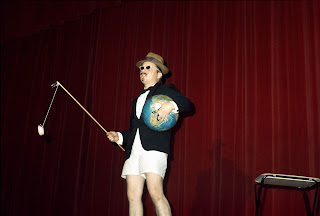 Raudelunas will present works both old and new, featuring performances by the Trans Duo, Jewels Trio, the Captains of Industry, a 21st century recreation of Anne LeBaron's notorious amphibian tape loop composition “Concerto For Active Frogs” and informative talks by the artists themselves. To add to the festivities, an extended trailer of Skizz Cyzyk’s Rev. Fred Lane/Raudelunas documentary Icepick to the Moon will be screened, as well as rare "lost" footage of Raudelunas from a mid­-1970s UA homecoming parade which has not been seen since originally filmed by artist and UA alum Fletcher Hayes.

The performance will simultaneously befuddle, amuse, amaze, and inspire, offering a glimpse into the secret history of some of Alabama’s most cutting edge artists.

Sonic Frontiers is an innovative concert series that brings further artistic diversity to West Alabama and invites creative exchange between world­class performers of adventurous music, students, and the greater community through public performances and discussions. All Sonic Frontiers events are free and open to the public. The events are sponsored by the University of Alabama’s New College, College of Arts and Sciences, School of Music, Creative Campus, Honors College, Blount Undergraduate Initiative, and Capstone International.

On Saturday, 01/26/13, Southwest Chamber Music kicked off their LA International New Music Festival. The festival consists of four concerts at Zipper Hall, featuring music by composers from all over the world. This inaugural performance included compositions from Japan, China, Venezuela, and Korea.

The first piece of the concert was Takemitsu's Bryce. Takemitsu's particular orchestrational genius shone in this solid interpretation, always alluding to something tangibly Japanese. Larry Kaplan's flute was featured in this piece, doing a fine job mimicking a shakuhachi. Percussionist David Johnson accompanied him on pitched gongs, chimes, and a plethora of metal objects dipped in water, while Alison Bjorkedal and Allison Allport played dueling harps, exploring the wide world of extended harp techniques with superballs on the sounding board, harp tuner slides, knocking on the sounding board, and tuning strings a quarter-tone away from equal temperament. Though equally integral, percussionist Dave Gerhart was relegated to lots of rolls on the marimba.

The second piece on the program was Lei Liang's Listening for Blossoms. Not only was it jointly commissioned by Southwest Chamber Music and Cicada Chamber Players, it was worked on at Copland House AND the American Acadamy in Rome. With so much pedigree behind the piece, it had better damn well be breathtaking/mindblowing. Full of hocketed pointillism, much of the piece involved disguised/doubled attacks, decays, sustains, and releases that seem to be in search of new combinatorial timbres. Those timbral explorations saw the ensemble slapping on the bass neck, sliding with the harp tuner, playing inside the piano, and more. The players made a convincing argument on Lei Liang's behalf, displaying an admirable strength of unity through the piece's ADSR focus. Listening for Blossoms revolved loosely around a pentatonic+  scale, so much so that when flutist Larry Kaplan introduced a series of major scale runs, it sounded downright Western. This was immediate juxtaposed by a just-intoned wash of open string harmonics that eventually led to the entropy of the piece into silence.

The big surprise of the evening was the announcement at the beginning of the concert that trumpeter Tony Ellis had gone to the hospital that morning and would be unable to perform with the ensemble. Hopefully he is recovering well, as it it always sad to see musicians culled by health complications. Due to his hospitalization, the performance of Elliot Carter's Luimen was cancelled, as it must be hard to find a musician both free and capable of playing the part at the dead last minute. If it were the work of a lesser-known composer, there might be some disappointment at this. However, Carter was often commissioned and often performed, so this sacrifice to the Flu gods seems to be a wise one. Here's a video of Luimen being performed at Tanglewood in 2012:


With the absence of Luimen, Adina Izarra's Oratorio Profano took its spot filling out the first half of the program. This piece featured baritone Abdiel Gonzalez and mezzo soprano Laura Mercado Wright, as an angel and devil respectively. Loosely based on an interpretation of Dido's Lament, Oratorio Profano was at it's strongest when that influence was most obfuscated. Venezuelan folk music styles were also referenced and distorted in a style remiscent of the exhuberant Mexican composer Silvestre Revueltas.

The U.S. premire of Unsuk Chin's cosmigimmicks filled out the second half of the program. A joint commission between the Nieuw Ensemble, Southwest Chamber Music, and the Wittener Tage für Neue Kammermusik, this piece featured three members of the Nieuw Ensemble. The first movement began with dead/muted notes, slowly revealing itself. A tribute to shadow puppetry, the movement sounded appropriately Carl Stalling-esque. The second movement, a tribute to Samuel Beckett's Quad, sounded like a collaboration between Andriessen and Takemitsu. The third movement, a tribute to Ligeti, began with the guitar quoting the second movement of Ligeti's Musica Ricercata, filling out the rests with dead strokes to create a steadier rhythmic pulse. As the pitch material was gradually expanded, the rest of the ensemble began their hocketed interjections. Even though this piece was performed without its trumpet part, it was still an exciting listen, full of timbral innovation and astute musical commentary.

There are still three more concerts in this new music series, featuring both living and deceased composers. I am excited to be reviewing all four performances, so stay tuned for more!
Posted by Unknown at 12:23 PM No comments:

Album Review: And the Madness That Followed... And the Madness that Followed... is the new solo album by guitarist, improviser, and Tears of the Moosechaser songwriter Antony DiGennaro. It is an album steeped in crumpled Americana, all squeaky hinges and leaky roofs.

The songs are full of slow motion, close-mic'd melancholia reminiscent of Sparklehorse's more morose moments, mixed with the burnt-to-a-crisp edges of Steve Von Till's solo work. These shellshocked ballads disintegrate into noisy improvised sections akin to the wide spectrum washes of The Swans.

Songs fade in and out again, like someone emerging from a thick, night-time fog. The result doesn't sound like a sonic effect, but feels like an organic extension of the entropic aural ecosystem set up by the songs.

Listen to it on Soundcloud, then buy it from CDBaby or Amazon

Posted by Unknown at 6:20 PM No comments:

Timur and the Dime Museum just finished a run of shows at the forward-thinking Prototype Festival in New York, where we premiered our new album, X-Ray Sunsets! It's currently only available at our shows, but will be more readily available soon. 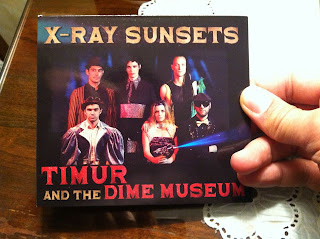 There are a whole slew of reviews coming up in the next month, as well as a few musical projects of my own, so stay tuned for more info!
Posted by Unknown at 1:49 PM No comments:

TDM at the Prototype Festival, NYC!

January 10-12, Timur and the Dime Museum will be playing our east coast premiere with five shows at Here, NYC! We are honored to be part of the exciting Prototype Festival, so if you are in New York City you should come down and check out some innovative, eclectic music.

We are excited to have video artist Jesse Gilbert join us for these shows! Jesse will create a rich, interactive environment to play a visual counterpoint to the music.

We will also have copies of our new album, X-Ray Sunsets, available! We will be playing songs from that album, and premiering a fresh batch of new songs.