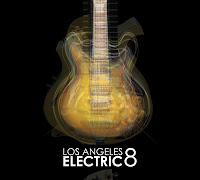 In August, the Los Angeles Electric 8 released Interlocking Textures, an album that "encompasses a century of American composers inspired by the subtle melodies and complex rhythms of Indonesian gamelan."

There really couldn't be a more fitting title for the album. The broad-stroke description of their sound would place them somewhere between the canonic structures of Steve Reich and the embossed fractal cycles of Indonesian Gamelan. But their sound travels beyond that. The group's transnational aesthetic draws from Bali, Java, Japan, Russia, and more.

Mantle Hood's Implosion, originally written for percussion quartet, also stays close to that Indonesian theme. Hood, who is best known as the grandfather of ethnomusicology,  fills the piece with Balinese-ish landscapes, but  populates it with distinctly American music.

That is followed by Toru Takemitsu's Romance. Originally written for piano, Romance benefits greatly from the guitar octet arrangement, creating a sort of timbral bridge between that quintessential Western instrument and the Japanese Koto.

The classical guitar background of the many of the musicians in the group is betrayed by the last piece on Interlocking Textures, an arrangement of Shostakovich's Octet, Op. 11. A combination of Tomita and Stanley Jordan comes to mind, though only superficially, as the comparison doesn't do the arrangement justice.

Interlocking Textures is an exciting album of electric guitar arrangements you won't hear anywhere else. The Los Angeles Electric 8 are not quite as raucous as Glenn Branca, yet not as traditional as the LA Guitar Quartet. Their musical path points in entirely other directions, and it will be exciting to see where it leads.