The Land of Noise

My mom has repeatedly advised me to leave Los Angeles before an earthquake sinks it into the ocean. In his Lost Angeles exhibit at Subliminal Projects, artist Stanley Donwood's outlook is slightly bleaker.

"Los Angeles is fucked. Everything is fucked, everything, and really, we all know this."


Those are the opening words of introduction to the exhibition catalogue. The centerpiece of the show is Lost Angeles Kozo, a panoramic series of linocuts depicting LA being destroyed by fires, floods, meteors, earthquakes, etc. There are also quite a few screen prints on the same subject. Each portrays one or more iconic LA buildings being subjugated by the elements (including Disney Hall, pictured below). These are complimented by London Views, a collection of prints that subject the city of London to a similar treatment, and Diamond Heist Bear. 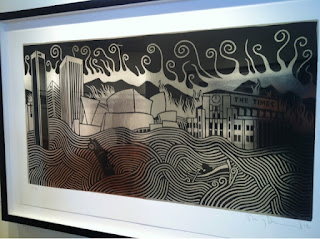 You might recognize London Views from the cover of Thom Yorke's Eraser album. Like many others, I first heard of Donwood from his numerous Radiohead album covers (every album since The Bends). I sometimes wonder if I would have known about him otherwise, but it doesn't really matter. I really like the look of these linoleum prints. They vaguely reminded me of a multitude of other artists I love, like Posada, Peter Kuper, Gorey, or even a little Doré. And I have definitely had similarly magnificent/terrifying visions of the destruction of LA.

I had never been to Subliminal Projects before, but they seem to often have music-related exhibits. Prior to Lost Angeles, they displayed art by Jamie Reid, who did the cover for Never Mind The Bullocks, Here's the Sex Pistols. Their next exhibit, Post Moral Neanderthal Retardist Pornography, is a collection of linoleum prints by Amphetamine Reptile Records founder Tom Hazelmeyer (they've released albums by bands like The Boredoms, Jesus Lizard, Melvins, X, etc.). Today (Sat, 05/26) is the last day Lost Angeles will be on display, so better hurry if you want to see it!
Posted by Unknown at 12:15 PM