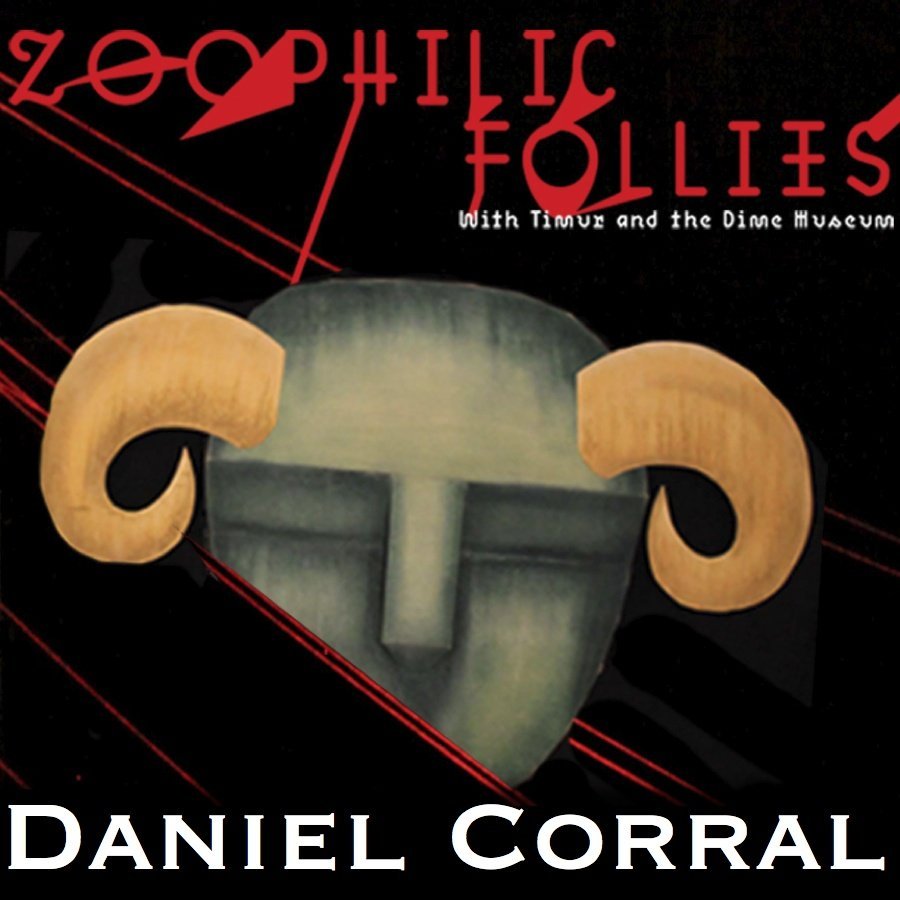 The music for the acclaimed puppet opera, Zoophilic Follies, is now available for digital download from Bandcamp! For only $5 you can have the entire piece, plus a PDF with the libretto by Sibyl O'Malley.

You can download one track from the album, "Wax and Feathers," for free until July 4!


"The adventurous puppet theater company Tandem and groundbreaking glam opera band Timur and the Dime Museum have joined forces in Daniel Corral’s new puppet-opera, Zoophilic Follies. With comedic relish, Zoophilic Follies, explores the lesser-known stories about the famed inventor Daedalus and illuminates how technology can give flight to our wildest dreams and gruesesome failures."

The premiere of Zoophilic Follies boasted an all-star ensemble of talented artists! The libretto was written by Sibyl O'Malley; it was sung beautiuflly by Timur Bekbosunov, Maesa Rae, Abby Travis, and Dorian Wood; the music was performed by Timur and the Dime Museum; Caitlin Lainoff and Danrae Wilson directed; and I wrote the music. Please give it a listen:

Listen to a song from Zoophilic Follies!

You can listen to one track from my puppet opera, Zoophilic Follies, on Soundcloud right now! It's called "Wax & Feathers"

Performed by Timur and the Dime Museum
Posted by Unknown at 5:18 PM No comments:

This Wednesday, I'll be releasing the studio recording of Zoophilic Follies!

Zoophilic Follies is my puppet opera that recently premiered at REDCAT. Timur Bekbosunov lead the ensemble, with Dorian Wood, Maesa Rae, and Abby Travis. The music was performed by The Dime Museum and a few additional musicians. It was designed and directed by Caitlin Lainoff and Danrae Wilson.

Wednesday evening, Timur & the Dime Museum will perform at El Cid with Tears of the Moosechaser and Noah & The Megafauna! It will be an enchanting evening we're calling a "Wicked Dreams Celebration!"

Come down and help us celebrate! We will be selling download cards for $5. After that, Zoophilic Follies will be available online only at Bandcamp or Reverbnation. 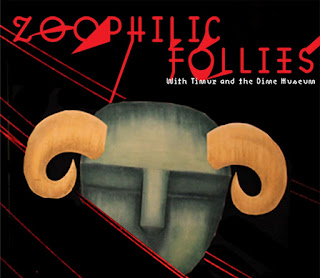 Cellist Chris Votek recently sent me info about his current band, Tes Elations. Despite the fact that he left my group Timur & The Dime Museum for them (ahem), I still like them a lot.

In their song Autumn, I hear the influence of Godspeed You! Black Emperor, Sigur Ros, or other similar groups that I consider the kinder, gentler children of Neurosis. They've got the the downtempo groove, post-post-minimal riffs, and gradual sense of building. The build is much subtler with Tes Elations, however, maybe due to the more acoustic instrumentation. Here's the video for that song:


The other songs on their Reverbnation page are more moody, upfront, and engaging - sometimes reminding me of My Brightest Diamond, Voodoo Economics, or 90's rock band Salt. But with more cellos, of course. If songs like "Visceral" are an indication of the direction Tes Elation's going, than I think they're heading for good things. I'm looking forward to hearing some of it live. I hear they have an album coming out soon, too...
Posted by Unknown at 4:48 PM No comments:

A thought about the nature of scale in this here 21st century.

Gabriel von Wayditch's opera Eretnekek is cited as running 8 1/2 hours in the Guinness book of World Records. Die Meistersinger is listed as the longest "commonly performed opera," running 5 hr. 15 min., while Robert Wilson's The Life and Times of Joseph Stalin supposedly lasts over 12 hours, though I haven't seen it and couldn't say how much of an actual opera it is. I'm sure there have been even longer operas, but that's the official Guinness word.

How long did it take them to write, fund, and premiere those pieces? And, how many people have been in the audience for them?

In contrast, how long did it take someone to make "Batroll'd 10 Hours?"

The technology needed to infinitely expand the scale of art is out there, and this is what we are doing with it. Consider that as the heat from our cloud servers warms the ocean, helping us tumble towards enviro-apocalypse

Meanwhile, The Flaming Lips released a 6-hour song called I Found a Star on the Ground last year, which you can hear in 3 parts on Soundcloud:

On March 24 LACMA will screen Christian Marclay's The Clock again. The Clock is a 24 hour film collaged from snippets of movies that include clocks in them (always showing the actual time).

The definition of EPIC SCALE is entirely different now than ever before. To trump all others, there is the Clock of the Long Now, which runs for 10,000 years.

And there is a whole other movement of tiny and short things as well, but that's another story. Either way, SCALE seems to be a prominent subject of early 21st century art.

Just a thought
Posted by Unknown at 2:33 PM No comments:

Here is my second Auscultations mixtape! Let me know what you think

Email ThisBlogThis!Share to TwitterShare to FacebookShare to Pinterest
Labels: Mix

But how do you rate blind musicians? Do you judge their work based on their disability (i.e. the drummer from Def Leppard is pretty good for only having one arm), or alongside everyone else (i.e. Evelyn Glennie is a world famous percussionist despite being mostly deaf because she is just AWESOME)? I usually tend towards the latter, I think. I work with several staggeringly-talented blind musicians, and am always amazed at how good they are at what they do.

These thoughts and more came to me Saturday night as I sat with Timur listening to blind mezzo-soprano Laurie Rubin. She performed at Valley Beth Shalom synagogue on Saturday night with pianist Marija Stroke and clarinetist Jennifer Taira. Most artists are only ever as good or as limited as the support community that surrounds them. Rubin, who has the 5th-most funded classical music project on Kickstarter, seems to have a very supportive community behind her.

Though her voice seemed most at home in the deep vibrato moments of Fauré and Schubert, there was one contemporary work on the program that she probably felt closer to. Rubin collaborated with composer Bruce Adolphe on a song called "Do You Dream In Color?" You might recognize Adolphe from Piano Puzzlers or the Chamber Music Society of Lincoln Center. In "Do you dream in color," Adolphe's composition effectively portrayed a monochrome wash many of us might associate with blindness, which complimented the hand-crafted verbosity of Rubin's own words set to music.

Oliver Sachs' Musicophilia has several chapters dedicated to case studies of blind patients, BTW. Among other things, he discusses how the parts of the brain commonly used for processing visual information are often used by blind people to instead process aural information. It is a much better book on the physiology of hearing than Daniel J. Levitin's book on the subject, "This Is your Brain On Music," which was an embarrassingly misinformed, skippable piece of literary shit.

OK, here's Rahsaan Roland Kirk rocking so hard the camera guys get a little hyper at the end:

Here is the awesome music video for Space Invader, a track from my 2009 online electronic album, Die Laughing!

The video was made by Icelandic filmmaker Thorbjorg Jonsdottir. I think it's great, and I'd love to hear what you think:

Die Laughing was released in 2009 as a free online album. Read the review of Die Laughing by Free Albums Galore.

We've collaborated a number of times before, including the 2007 short film, EMPEROR